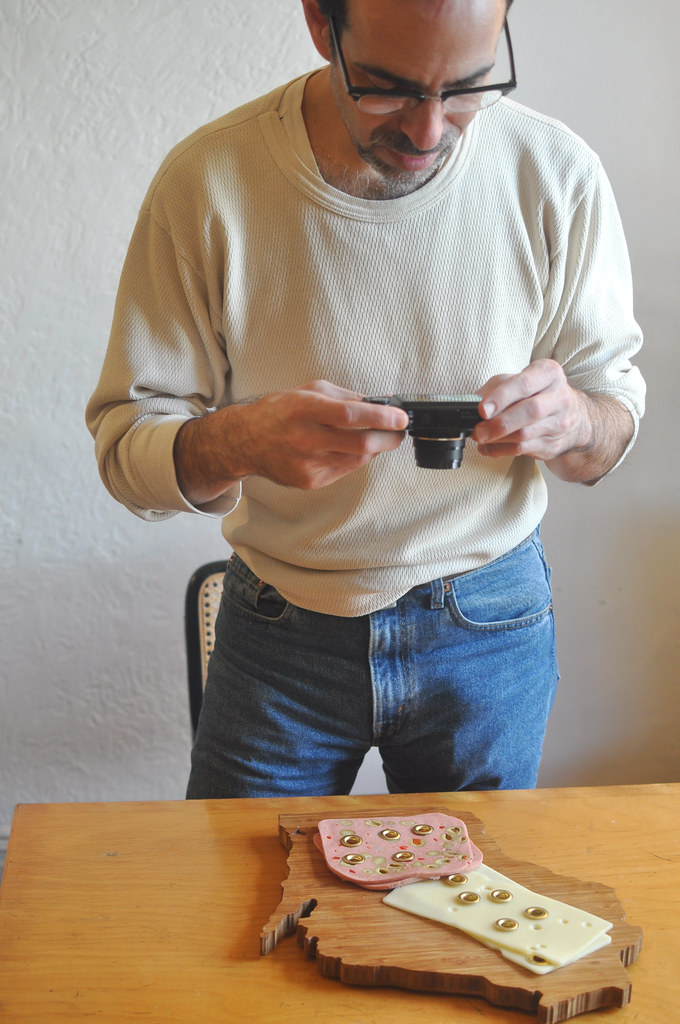 Gromm•It, an art/media project by journalist Paul Lukas, explores the juxtapositions resulting from the installation of metal grommets in unlikely surfaces, especially foodstuffs. Additional information on the project is available on this page in an FAQ format.

How and when did the project begin?

The project began in December of 2015, when I had a little home-improvement task that involved installing grommets into something. That got me thinking: What else could I put grommets into? A quick look at my pantry provided the answer. I liked the way those items looked with grommets, and I knew right away that I wanted to keep riffing on the general theme of grommetized food.

What is, you know, the point?

The point can be whatever you want it to be — like all creative projects, this one is subject to the viewer's interpretation. But if you want a crib sheet, here it is: I’m fascinated by the way grommets lend an air of factory production to everything they touch. An object with a grommet instantly looks manufactured, industrial, professional, official — that’s a lot of power for such a simple little item. I’m interested in exploring how those impressions collide with things that aren’t industrial. Foodstuffs work particularly well, plus the resulting images evoke terms like “factory farming,” “processed foods,” and “Frankenfoods,” which are part of current public policy debates regarding food. (Also: Grommetized food just looks interesting.)

Are you aware of trypophobia?

I'd heard of it before but had frankly forgotten all about it when I started this project. Once the project launched, several people immediately said it made their trypophobia kick in — sorry about that. All who suffer from this condition have my sympathies, and should probably stay away from Gromm•It.

Do you eat the food after it's been grommeted?

Whenever possible, yes. I either remove the grommets first or, when that's not feasible, just eat around the grommeted area. I don't get any bonus conceptual satisfaction from eating the grommeted items or anything like that. I just prefer not to waste food.

Do you re-use the grommets?

Whenever possible, yes. After the photography is done, I remove them from the food, wash them, and put them back in the hopper for future use.

Will you branch out beyond foods and start adding grommets to non-food items?

Maybe at some point. But for now I plan to stick to food.

How did you get the hole in the egg without breaking it?

With a lot of trial and, mostly, error. I hard-boiled several eggs, but the shell always developed big fissures when I tried to create the hole. Ditto when I tried freezing a few eggs. After doing a bit of internet research (which is what I should have done in the first place), I did the following: (a) I used a nail file to file down the shell in the target area, to weaken it a bit. Then (b) I put a Band-Aid over the target area, to keep the surrounding shell from developing fissures. Then (c) I used an X-Acto knife to create a very small hole, and (d) I kept using the knife to enlarge the hole until it was grommet-ready.

How did you get the mini-grommets into the Cheerios without breaking the cereal pieces?

It turns out that Cheerios are ideal for grommeting. The holes are just a teeny-tiny bit smaller than the mini-grommets, so the grommets fit inside the cereal pieces quite snugly, shaving a very slight bit of Cheerio from the edge of the hole along the way (I ended up with a lot of Cheerio dust). If the holes were any bigger, the grommets wouldn't have stayed anchored in place; if the holes were any smaller, the cereal pieces would have broken. Just a lucky confluence of circumstances.

How did you get the holes in the walnut shells?

I used a power drill, but it was tricky, because walnut shells are pretty hard. Once I figured out which drill bit to use in order to make the proper-sized hole, it turned out that the bit was unable to drill a hole in the shell. I had to use a much smaller/narrower bit to pierce the shell, then use a somewhat thicker bit to widen the hole, and then, finally, use the proper-sized bit to further widen the hole to the size I needed. Then I had to repeat this three-bit procedure for nine walnuts (plus there were two more whose shells broke during the process). All in all, a lot of drilling — I apologized to my downstairs neighbor for all the noise. As I've learned more about putting holes in things, I see now that I probably should have used a Dremel tool instead of a standard power drill, but I didn't own a Dremel at the time. Live and learn.

How did you get the grommets embedded into the ice cubes?

I took my grommet kit's punch tool (the same one I've used to punch holes in bacon, olive loaf, and so on), heated it over a flame, and then pressed it into the ice cubes to melt out grommet-sized holes. Then I inserted the grommets into the holes and put the cube tray back in the freezer for a bit so the grommets would become sealed into their cubes.

Those just happen to be the two cutting boards I use most often in my kitchen, and they seem pretty good for presentation-style photos. There's no underlying message, aside from the fact that I really like pigs, really like Wisconsin, and really like both of those cutting boards.

What camera are you using?

Almost all of the photos on the site were taken with a Canon PowerShot SX280 point-and-shoot. A few were taken with my iPhone 5 while the Canon's battery was recharging. I'm not a very good or patient photographer, so any problems with the photos are almost certainly attributable to me, not to the equipment.

These photos would look great in a coffee table book. Are you planning to do that?

I appreciate the vote of confidence, but I kinda doubt that any publisher would be interested in such a project. But hey, if anyone out there in the book biz is interested, I'm all ears.

These items would look great in a gallery show. Are you planning to do that?

See above, regarding the book. Basically, I'm skeptical that anyone would be interested, but I'd be happy to be proven wrong.

I'm interested in owning a grommeted item. Do you take commissions?

How long do you plan to keep doing this?

For as long as I keep enjoying it, or until I feel like I've had enough. That could happen tomorrow or it could happen years from now. I suspect it will probably be somewhere in between.

Update: The project is now finished. It's possible that I may add some additional entries if the inspiration strikes me, but for now I feel like we've reached a good stopping point.